What was supposed to be 4 days in Cortina ended up with being 12 days in Cortina. Not that I have anything against waking up to the Dolomites and UNESCO world heritage every morning. Well, at least I knew they were there, there wasn’t like I could see anything. The fog and snow made sure of that. And that people, is not a sight for sore eyes. I actually had my mom and dad fly down since I’ve been bragging about Cortina since the first time I was there a couple of years back: “It’s soooooooo beautiful there,” “if I ever wanted you guys to come to a race, that’s the place you should come,” and so on. Well….that backfired…. They never got to see either Cortina, the Dolomites or me race…(they are obviously bad luck so back in the sofa it is for them)

Anyhow, the races from Garmisch got moved to Cortina as well since there is apparently no snow there. (All the snow came to Cortina this year you see) Suddenly we had 4 races there instead of two.
First of all; I love Cortina. Every time I’ve been there it’s been great. Yes, I too think it’s because of me, thank you very much, but also the conditions are great and the courses has been amazing! On the downside; Since I’m not the only one who loves Cortina, the amount of people who skis fast there is huge! Still, I had my second best result there in SG with ending 13th there on Thursday so I’m not complaining. I also had my best downhill result there with a 28th place Friday. On Saturday I wanted to try a new approach and decided to check if people were missing me if I don’t show on start. They did, so mission accomplished! No, this last week I’ve been brewing on a small cold so I decided to skip the downhill race on Saturday to save my energy and get well for the SG race on Sunday! The SG race went fairly ok, ended 20th in a really difficult course, but with that I qualified for the SG finals in Lenzerheide in March! So Cortina wasn’t too bad for me this year.

I’m now going home for a couple of days before Kranjska Gora and the final GS race before the Olympics! I’m excited! 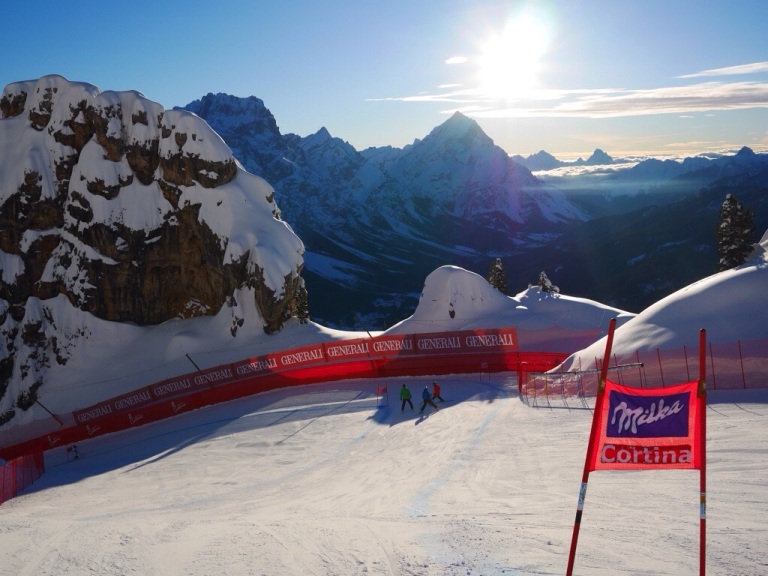 Tried camping outside for the first time in forever this weekend🏕 Nice to change up the scenery other than my apartment for a change☺️ #marshmellow #cocoa #campfirebread
This one goes out to a true idol - role model - competitor, but most and foremost - one of my best friends❤️ @tina_weirather For always being my home away from home! Showing how friendships goes beyond boarders, nationality and results... So....this one is to you Tina - though your actual name is Christina🧐❤️ I’ve had some time to think, though it’s hard to let this one sink. A friendship that goes beyond results as bronze, silver or gold - this friendship is gonna last until we both are old👵🏼👵🏼 I wanted to say some words from me to you, and yes, I will say this in any interview😌 Thanks for the late night talks and those afternoon walks! Thanks for the time spent together at breakfast, lunch or dinner - where it didn’t matter who came last or who was the winner. And let’s not forget those coffee cups where we laugh and cry of all of our screw-ups. Thank you for showing compassion, sympathy and love - something you must never let go of! If you haven’t understood this by now, I’m standing here taking a bow... for all that you’ve achieved and done, making footsteps so deep and tough to follow for anyone! A true champion and a friend, who’s back I’ll always defend! You light up every room like flowers do in full bloom! 😏💐 The World Cup might have been the place we met, but you sure as hell ain’t done with me yet! 😌 Even though you now have retired, you gave this your all and think of all those you inspired🙌  With this I´ll finish my rhyme - Thank you Tina - for being my number one partner in crime❤️
Dear @ninaloeseth ❤️ It comes a time in every athletes life when the sport isn’t everything anymore. To jump of this ‘athlete’ train and move on to the next one. We grow older and we move on, and maybe even in the end - we grow up. Every kid have role models and idols, and I’ve been so lucky to be able to be on the same team as mine🇳🇴: This is to the one who paved the way, our rock, our teacher - the one to follow and the one to beat. Our safety, our wisdom and sometimes even our mother reminding us to wear sunscreen! ☀️ The one who picks us up when we are down, or the one who challenges us to do better next time. The one who shows through action, not words, - to fight for what you believe in and never give up. For 10 years I’ve been lucky enough to call you my team mate, and for 10 years you’ve guided and taught me to do better and be better. So here is to my leading star, my team mate and most and foremost my friend - Nina🥂❤️ Thank you for making it possible for me and the many others with me to achieve our dreams! 🇳🇴💃👯‍♀️ - All the best for whatever train you jump on, your forever fan - Ragnhild 🙏